Organ donation from deceased donors is gaining momentum in India and it is time to take this programme further to help thousands of patients with organ failure get a second chance at life.

The Transplantation of Human Organs Act, 1994 heralded a significant change in the organ donation and transplantation scene in India. Many of the states of India adopted the Act over the next few years, but there was hardly any focused work done towards furthering the deceased organ donation programme. In a few states, likeminded medical professionals and philanthropists came together to take the initiative forward. Tamil Nadu and Andhra Pradesh were at the forefront in this with some hospitals and non-governmental organizations like MOHAN Foundation taking the lead in setting up an organ sharing network, the Initiative for Organ Sharing (INOS) in the year 2000. As a result, the retrieval of 1033 organs and tissues were facilitated in these two states by MOHAN Foundation (Table 1).

In 2008, the Government of Tamil Nadu through a pioneering effort put together government orders laying down systems and procedures for deceased organ donation and transplantation in the state. In this way, the Cadaver Transplant Programme (CTP) came into being. The government orders also came at a time when the public was becoming more aware about organ donation. The organ sharing registry developed by MOHAN Foundation for INOS was adopted by the state government to start the Tamil Nadu Network for Organ Sharing (www.tnos.org). The Tamil Nadu model has been possible due to the coming together of both government and private hospitals, NGOs and the State Health department. With an organ donation rate of 1.9 per million population in 2014, Tamil Nadu is now the leader in deceased organ donation in the country. Recently, another government order was passed for the formation of a new regulatory body called Transplant Authority of Tamil Nadu (TRANSTAN). It was registered in March 2015 and will coordinate the entire range of transplant activities including live transplants. The CTP, Regional Organ and Tissue Transplant Organisation (ROTTO) and State Organ and Tissue Transplant Organisation (SOTTO) will all come under its umbrella of activities. ROTTO and SOTTO come under the purview of the National Organ and Tissue Transplant Organization (NOTTO).

National Organ and Tissue Transplant Organization (NOTTO) is a national level organisation set up under Directorate General of Health Services, Ministry of Health and Family Welfare, Government of India located at 4th and 5th Floor of Institute of Pathology (ICMR) Building in Safdarjung Hospital New Delhi. It has two divisions:

This has been mandated as per the Transplantation of Human Organs (Amendment) Act 2011. The network will be established initially for Delhi and gradually expanded to include other States and Regions of the country. Thus, this division of the NOTTO is the nodal networking agency for Delhi and shall network for Procurement Allocation and Distribution of Organs and Tissues in Delhi.

The Transplantation of Human Organs (Amendment) Act 2011 has included the component of tissue donation and registration of tissue Banks. It becomes imperative under the changed circumstances to establish National level Tissue Bank to fulfill the demands of tissue transplantation including activities for procurement, storage and fulfil distribution of biomaterials.

The main thrust & objective of establishing the centre is to fill up the gap between ‘Demand’ and ‘Supply’ as well as ‘Quality Assurance’ in the availability of various tissues.

Organ donation in other States

It is heartening to see that many other states are following Tamil Nadu with robust deceased organ donation and transplantation programmes (Fig.1). Andhra Pradesh has the Jeevandan programme (www.jeevandan.gov.in), Karnataka has the Zonal Coordination Committee of Karnataka for Transplantation (www.zcck.in), and Maharashtra has the Zonal Transplant Coordination Center in Mumbai (www.ztccmumbai.org) and Nagpur. Gujarat has also been working consistently in this area. MOHAN Foundation has been spearheading efforts in Delhi-NCR and Chandigarh and the results are encouraging. The Kerala government set up “Mrithasanjeevani” and the Kerala Network for Organ Sharing (www.knos.org.in) in 2012 and the programme has been moving forward in leaps and bounds. The most recent initiative in this field has been taken by the Government of Rajasthan with the setting up of the Rajasthan Network for Organ Sharing (www.rnos.org) in December 2014. There have been five deceased donors in the state till 30th July 2015. As a result 12 solid organs (liver, kidney) and two heart valves have been retrieved. Working closely with the Rajasthan government is MFJCF (MOHAN Foundation in collaboration with Jaipur Citizen Forum). As in Tamil Nadu, in many of the states the deceased organ donation programme involves public-private-NGO partnerships. 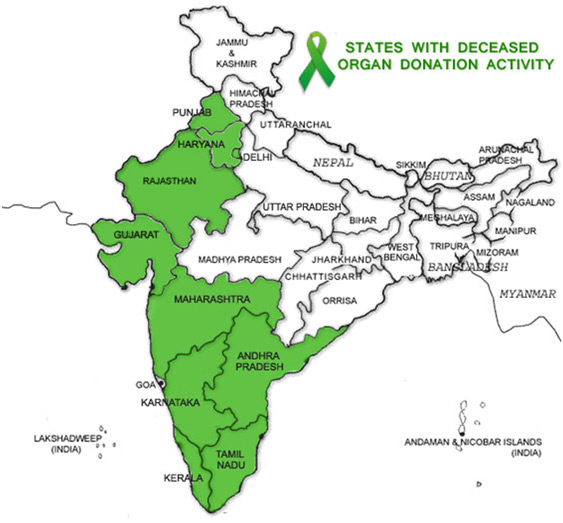 A total of 530 organs were retrieved from 196 multi-organ donors in 2012 resulting in a national organ donation rate of 0.16 per million population (Table 2). 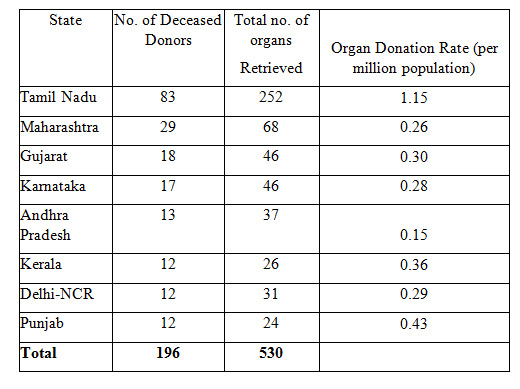 A total of 852 organs were retrieved from 388 multi-organ donors in 2013 resulting in a national organ donation rate of 0.26 per million population (Table 3). 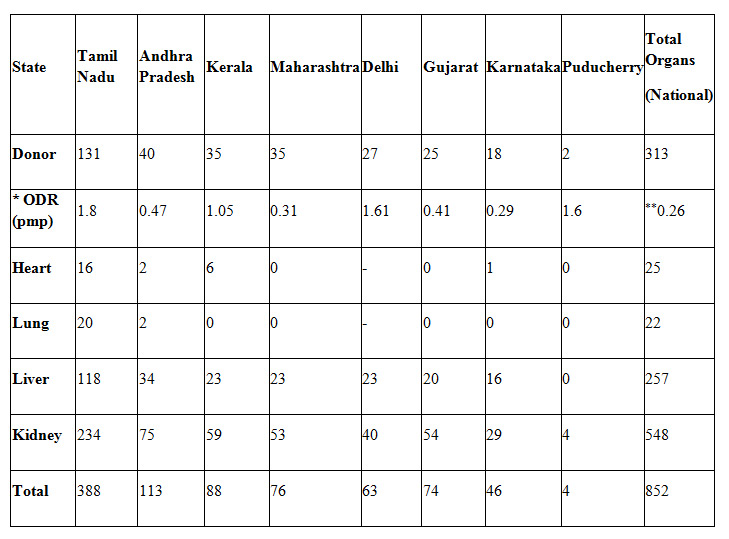 A total of 1150 organs were retrieved from 411 multi-organ donors in 2014 resulting in a national organ donation rate of 0.34 per million population (Table 4). 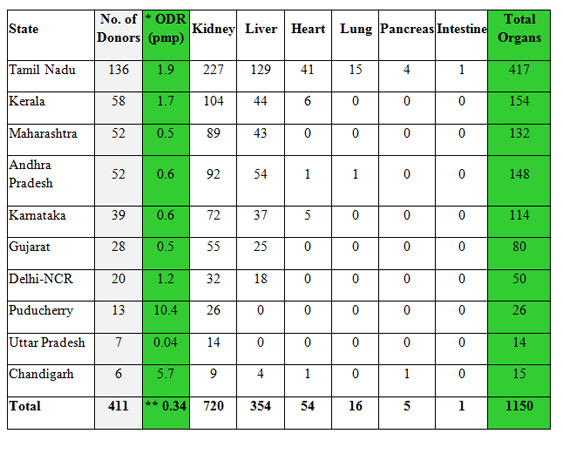 In the last two years we have seen doubling of the deceased organ donation rate from 196 donors in 2012 or 0.16 per million population (pmp) to 411 in 2014 or 0.34 pmp (Table 5 & Fig. 2). The figures may not look impressive enough, but when you consider that these figures are of only 10 states and union territories (UTs) of India and the donations resulted in 1150 solid organs like kidney, liver, heart, lung, pancreas and intestine being retrieved, it does become significant (Fig. 3). Rather than looking at the national average, it may be better to look at the state wise figures and many states have crossed 1 or 2 donations per million population. It also means that deceased donation transplantation is now responsible for almost 40% of the liver transplants done in the country and over 15% of kidney transplants. 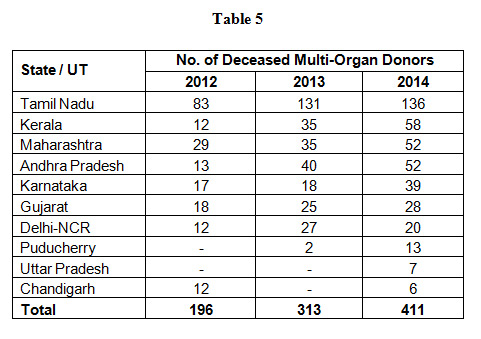 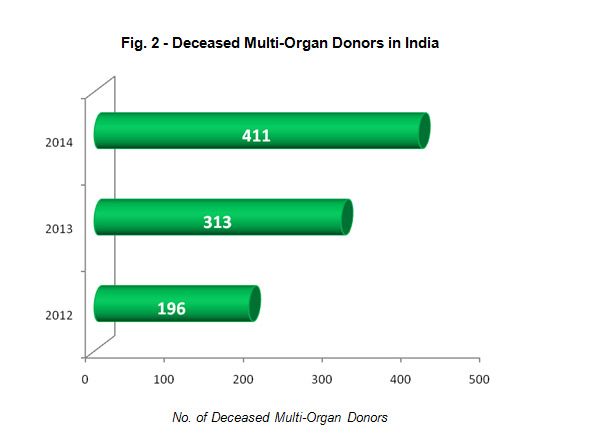 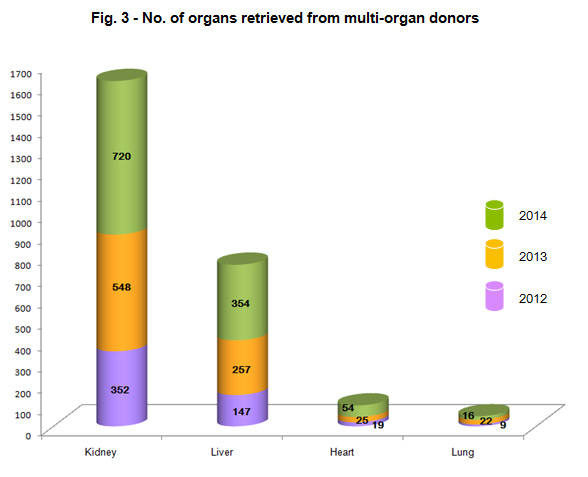 The states that have led the way forward include Tamil Nadu, Kerala, Andhra Pradesh, Maharashtra, Karnataka, Gujarat, Uttar Pradesh, Puducherry, Delhi-NCR and Chandigarh. Tamil Nadu leads the table in 2014 with an organ donation rate of 1.9 pmp closely followed by Kerala at 1.7 pmp (Table 6). 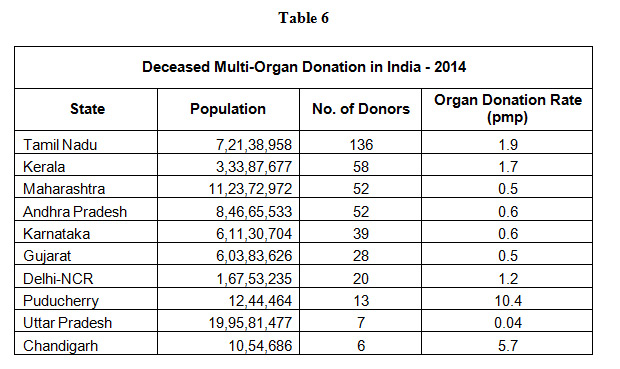 1. Support of the media in promoting the cause

3. Increase in number of trained transplant coordinators in the programme

4. State Government’s proactive role in the programme in some of the states

5. Cooperation between public and private hospitals in the states that have done well

6. Specialist Intensive care doctors who have been supportive of the programme

7. Awareness among the public and their support towards the programme

8. Role of NGOs like MOHAN Foundation in helping with capacity building and creating awareness among the public and in hospitals.

Tamil Nadu has continued to contribute substantially to the number of deceased donors and is the only state where the second tier cities like Coimbatore, Madurai, Trichy, Vellore, Salem and Tirunelveli have had deceased donors. This speaks highly not only about the programme, but also the availability of advanced medical facility in the state.

Over the past 18 years, MOHAN Foundation has facilitated the retrieval of around 5100 organs and tissues. During this time, we have encountered some interesting misconceptions about the programme -

1. People are generally unwilling to donate the organ(s) of a brain dead relative.

This is a huge misconception in our country that people are unwilling to donate. In India, every day we have almost 60 families donating the eyes of their loved ones. Also, periodically many whole body donations are taking place to the Anatomy department for research.

We have seen that when a trained counsellor talks to the relatives of a brain dead patient and explains the situation, almost 65% will agree to donate. This is the figure in many states of the country be it Tamil Nadu, Andhra Pradesh, Maharashtra, Gujarat, Kerala or Delhi.

Studies conducted both in corporate hospitals and government hospitals show the figures to be similar. Also, there has been no correlation between people giving consent and their economic class or level of literacy. If they are counselled, explained about the irreversibility of brain death, and given time to decide, many will say yes to donation.

The problem is not that people do not want to donate. The real problem is that there are no mechanisms in our hospitals to identify and certify brain death. Also, often, no one informs the relatives of a brain dead person that they have the option to save lives by donating the organs of their loved one.

2. There are not many patients who are diagnosed with brain death.

This is not true.

While there are no actual figures available, guesstimates are that at any given time every major city has 8 to 10 brain deaths in various ICUs of the city. Trauma is the main reason for brain stem death in India. According to the World Health Organization (WHO), road traffic injuries are the sixth leading cause of death in India with a greater share of hospitalization, deaths, disabilities and socio-economic losses in the young and middle-aged population (3). Fatal traumatic brain injuries were seen in 68.73% cases of head injury in a study from All India Institute of Medical Sciences, New Delhi (4).

The way ahead is to develop infrastructure in government hospitals, to conduct Continuing Medical Education (CME) programmes on organ donation and transplantation for medical and paramedical personnel, and to train counsellors/transplant coordinators. It is also important to formulate national guidelines (Standard Operating Procedures) on brain death certification, donor optimization and how to tackle medico-legal cases that constitute the bulk of donations in India. And finally, building positive public will about organ donation is paramount and the role of the media is crucial in this.