Organ Donation in Tamil Nadu from deceased donors has been one of the best examples of public-private partnership in the country. It is important to note that in case of a live organ donation only one kidney or a part of a liver can be donated. On the other hand, in a deceased organ donation up to 9 organs and tissues can be donated by one brain dead donor. However, the organs cannot be utilised unless a systematic waiting list is maintained for the various organs and further to ensure fair allocation a sharing network has to be in place wherein the various private and government hospitals (with transplant units) in the State are part of it.

MOHAN Foundation started a pilot programme named Indian Network for Organ Sharing (INOS) in Tamil Nadu in 1999. Initially, there were 5 hospitals from Chennai that were part of it. They started this pilot project with the belief that organs were very precious and should not be wasted. They believed every available organ should be shared between various hospitals with a license for transplantation. Before 1999 there was no successful model in the country for organ sharing. This partnership in Tamil Nadu saved the life of 681 patients with organ failure. (Refer to Table 1)

This small group of doctors wanted to make this a reality for the country. Many watched this group grow and joined them and wished to create a similar organ sharing network in their States. To a large extent the experience gained with the network and the web-based registry that was formed was used in building the model for deceased organ donation programme by the Government of Tamil Nadu. This “Model Programme” to make the deceased organ donation procedurally and structurally possible was given recognition and further strengthened in the year 2008 when the state government decided to bring all the stakeholders together and formed the Tamil Nadu Organ Sharing (TNOS) network. And now based on these models, networks are formed in Kerala and Andhra Pradesh with the Kerala Network for Organ Sharing (KNOS) and the ‘Jeevandhan’ being set up in 2012.

In September 2008, the Department of Health and Family Welfare, Government of Tamil Nadu initiated the State Cadaver Transplant Programme (CTP) which provides transparent organ sharing and allocation framework.  The State Government also issued guidelines and rules in the form of ‘Government Orders’ to facilitate the implementation of the deceased donation programme. There are 55 licenced organ transplant hospitals including both Government and private hospitals actively participating in this programme (www.tnos.org). The NGOs namely MOHAN Foundation & National Network for Organ Sharing (NNOS) are involved in conducting on-going awareness campaigns on organ donation both for general public and for the hospital staff.  All these efforts have resulted in multi organ donations from 360 brain dead donors with 2001 organs and tissues retrieved and transplanted from October 2008 to June 2013 (Refer to Table-2). This shows that on an average Tamil Nadu has about 75 – 85 multi organ donors every year. 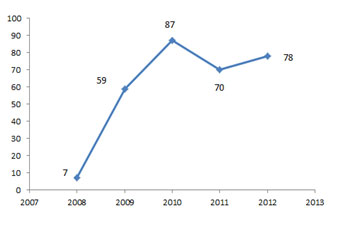 In 2012, there were about 196 multi organ donors in the country among which almost half were from Tamil Nadu[ii]. With the rate of 1.15 per million population (pmp) which is almost 7 times the national average (0.16 pmp), Tamil Nadu leads the deceased organ donation programme in the country. In fact, Chennai city’s organ donation rate for the year 2012 was 14 per million population (65 multi organ donors), which was comparable to the organ donation rate in Netherlands, Poland and Denmark[iii]. The state CTP was lauded by the British Medical Journal (BMJ) for its exemplary work in April 2013[iv].

The Rajiv Gandhi Government General Hospital (RGGGH) is the second in the list where the largest number of deceased organ donation is happening in the state. MOHAN Foundation’s trained transplant coordinators are placed in RGGGH based on a Memorandum of Understanding (MOU) which was signed in February 2010.  These coordinators have facilitated 63 multi organ donations in RGGGH from February 2010 to June 2013. (Fig-1) 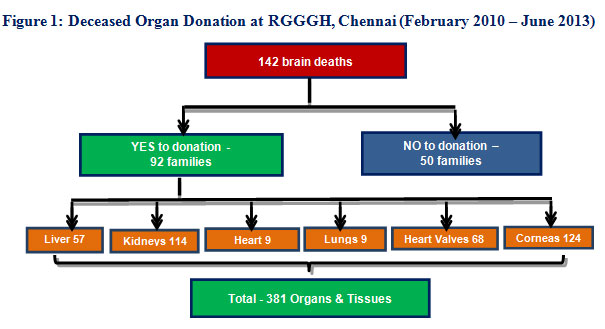 The turning point in the programme was the donation of the organs of a 16 year old boy Hithendran. Both his parents were doctors. This donation, at one of the corporate hospitals, resulted in tremendous media attention and gave visibility to this programme. This ‘Hithendran effect’ gave momentum to the programme.

In February 2012, a group of corporate organisations conducted an awareness programme on organ donation for its employees along with the assistance of CTP and MOHAN Foundation. Many people pledged to donate their organs after death and undertook to carry a donor card. Among them was a young man from a leading IT company. At the time of pledging he never imagined that he would soon be in a position where he had to give consent for organ donation. A week after the event, the young man's brother fell ill and became critical. He was shifted to a corporate hospital in Chennai, but his condition deteriorated very rapidly. The doctors informed the young man that his brother was brain-dead. He was stunned. But even in that moment of shock and grief he knew what needed to be done. He donated his brother's organs to help other’s live. Many such examples where the trigger to donate for the cause was either through a talk, a media story or though carrying an organ donor card are being experienced in Tamil Nadu.

Though the state leads in deceased organ donation, the need for organs and tissues for transplantation still remains enormous. The change in perception among the medical professionals about brain death and the positive attitude among the public about organ donation remains the key to a successful Deceased Organ Donation Programme in the State as well as in the country.

The State of Tamil Nadu which is known for its literature, architecture, religious diversity and many others is now also notable for another milestone that sets the State as a role model for the rest of the country.  The joint venture of the State Government, transplant hospitals and the Non-Governmental Organizations (NGO) has led to the success of the state deceased donation and transplantation programme.

[iii] WHO Global Observatory on Donation and Transplantation 2010