The diagnosis of Brain Death in children is generally regarded as being more difficult than in adults and there is considerable variation in the exact protocol followed in different countries, and even between different states in the same country. Nevertheless, the diagnostic procedure is essentially by clinical examination.

Brain death is defined as irreversible cessation of all functions of the entire brain, including the brain stem

The following conditions must be met before brain death can be determined:

The diagnosis of brain death is essentially clinical.

There must be absence of higher brain function – lack of consciousness

There must be absence of brain stem functions

Observations that are compatible with brain death

The following observations can be present in brain death

Observations that are incompatible with brain death

The following observations are incompatible with brain death:

Number of tests and who should perform them

Two examinations (including two apnea tests) should be performed, separated by an interval.  A different Consultant Physician who is taking care of the child should perform each clinical examination. These physicians should have specific expertise and experience in performing such assessment and can include Pediatric Intensivists, Neurologists, Anesthetists, Neurosurgeons or Pediatricians. The same individual may perform the apnea tests. In case the testing is being performed for the purposes of organ harvesting, additional requirements from the individual State Governments may apply (such as pre-registration and authorization of the physician performing the tests).

The role of the apnea test has been questioned recently5. Nevertheless, it continues to be a part of the Brain Death testing protocol in most countries at this time. The apnea test must be performed twice (as part of each clinical exam), but may be performed by the same individual – preferably the physician who is managing the patient’s ventilator. The following section describes how to perform the apnea test.

The same pre-requisites apply as for performing the clinical tests – i.e. the patient should not be hypothermic, hypotensive or have a serious metabolic or endocrine disturbance. Additional contraindications include a high cervical spinal cord injury or very high oxygen / ventilatory requirements that will result in the inability to disconnect safely from the ventilator. If the apnea tests cannot be performed safely, then an ancillary test must be performed to determine brain death.

Response: In a brain dead patient, no respiratory efforts should be seen during the period of apnea.

Ancillary tests are not routinely required to determine brain death and are not a substitute for the clinical examination. However, they may be used in specific situations:

A number of ancillary tests are available.

A digital EEG should be performed by a technician who has experience in performing EEG’s for the purposes of determining brain death. In general, the sensitivity should be increased to 2 μV, the high frequency filter should be set above 30 Hz and the low frequency filter set not above 1 Hz. A minimum of eight scalp electrodes should be used. The EEG should demonstrate a lack of reactivity to intense somatosensory and audiovisual stimulation.

The purpose of these tests is to show that there is no flow in the intracerebral vessels, due to occlusion of the vasculature by cerebral edema. The various techniques by which intracranial blood flow can be assessed include four vessel cerebral angiography, Radionuclide imaging, CT angiography, Magnetic Resonance angiography and Trans Cranial Doppler ultrasonography. Of these techniques, four-vessel cerebral angiography is regarded as the gold standard and involves direct injection of contrast medium into both Carotid arteries and both Vertebral arteries.

Of all the confirmatory tests mentioned above, EEG is the most easily available test. Radionuclide cerebral blood flow assessment is also acceptable – the remainder are time consuming, not easily available, not always standardized, may require shifting an unstable patient and, in some cases, expensive.

Any one of the following tests may be used (depending on availability) when an ancillary test is required:

Table 1 below gives the time gap between the clinical tests.

The minimum time interval between first and second testing will be six hours in adults. In case of children 6 to 12 years of age, 1 to 5 years of age and infants, the time interval shall INCREASE depending on the opinion of the above Brain Stem Death experts. 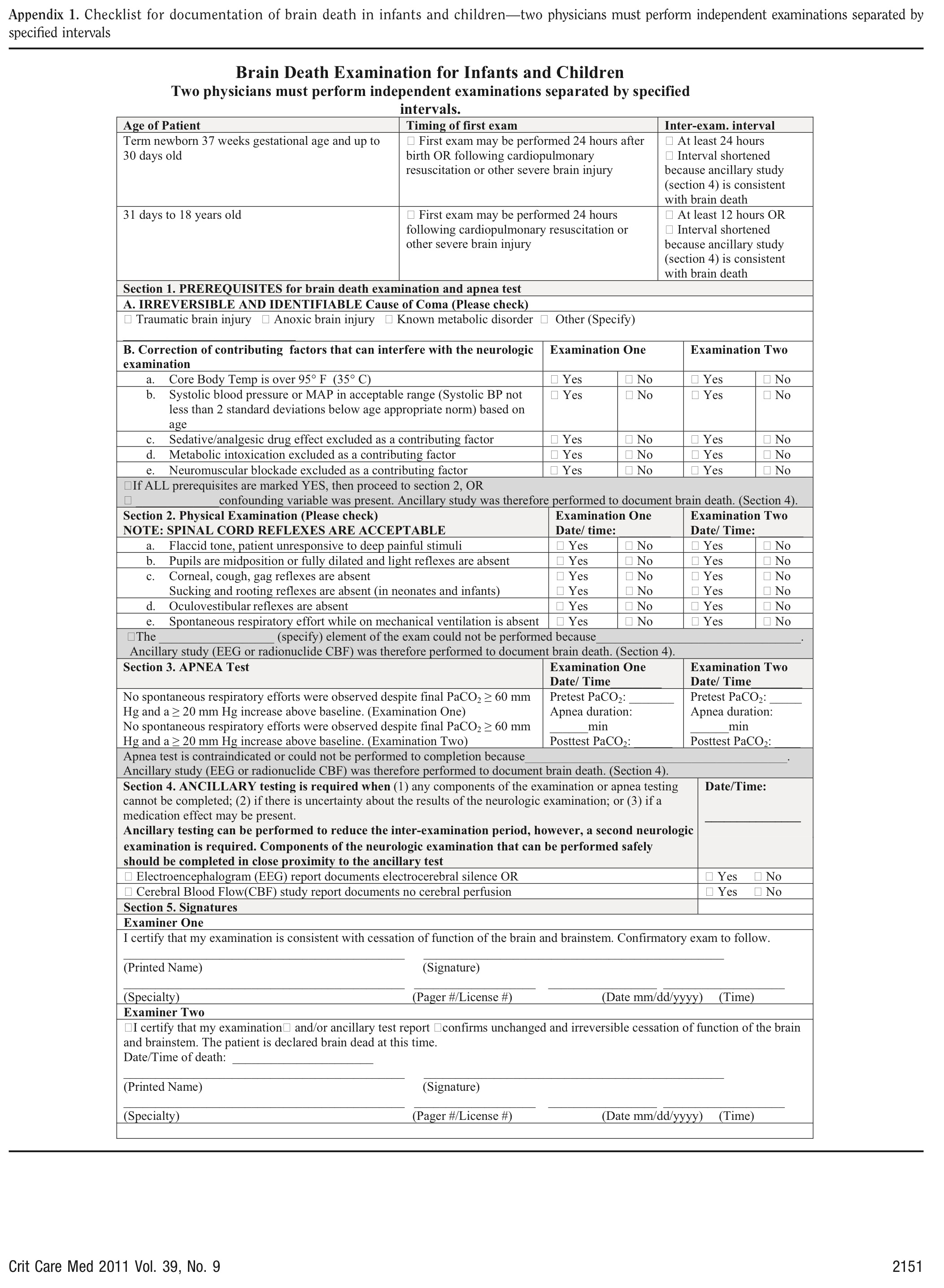